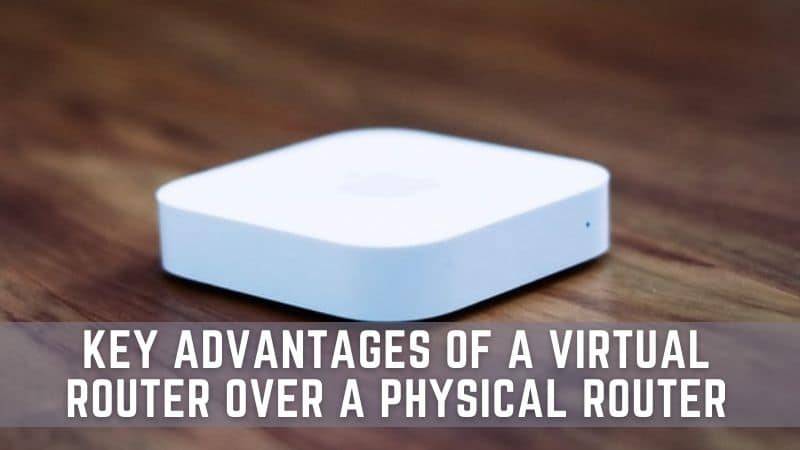 In this article, we will talk about how virtual routers are used as a replacement, what key advantage does a virtual router has over a physical router, and whether you can implement it in your business environment. The role of a router is to forward traffic from one network to another. The router receives packets from computers on one network, examines them to find out where they’re going, then sends them through an appropriate line to get there. A router is not only able to process data but also maintain session information while it’s moving packets between networks. Routers are very important because without this functionality no data would be able make it onto the internet or anywhere else.

What is a virtual router?

A virtual router is a computer program that performs the role of a router. Virtual routers do not replace physical routers, but they perform similar functions and you can use them as an alternative to large-scale networks. A disadvantage is that you cannot physically repair them if anything goes wrong.

Virtual routes work by separating the hardware responsibilities from software ones; this means that more than one system or application can use the same hardware concurrently while sharing data packets (and thus the expense of buying new hardware). When businesses require high-performance network configuration, such as Cisco Systems Inc., they need more advanced features of routers to meet their business needs. Having basic router functionalities don’t cut the chase. This is where virtual routing comes in. To understand why companies need virtual routers, we need to understand the basic features of routers. A router works by sending data packets (small units of information) through an internet network. These units travel like cars on a freeway; they can only go in one direction along a path (which is called a ‘link’). The simplest form of this type link is one cable that connects two pieces of hardware together. A virtual router works by splitting up the various parts of the function from those which simply pass around packets from one part to another. Instead, there are three types:

– Hardware Partitioning: In this method, the router’s hardware portions are separated so that each partition manages its packets as if it were handling all routing functions for the whole system.

– Virtualization: This method uses hardware to run several smaller routers on a single computer. This allows different virtual routers to work independently without interfering with each other.

– Software Partitioning: The third method partitions software so that packets travel from one partition to another in the order they are received while the system is working. They are given priorities according to their functions, so some can use more bandwidth than others.

Key Advantage of using a virtual router over a physical router

Virtual routers have many advantages over physical routers. We will be sharing some of the advantages below!

Because routers are usually large, expensive devices. Companies install them at their main location. The main routers then connect to multiple other smaller routers throughout the company’s building or campus. You can create virtual routers inside of a server so that you do not need to purchase additional hardware. This means that companies can easily reduce the cost of needing to have a physical router for each part of their network

2 – No need to physically divide the network

The benefit of being able to create virtual routers is that you can separate traffic between parts of your network without having to physically divide the networks using an expensive device such as a router. An example would be if you wanted separate guest access from employee access on different sides of your building. The only instances where you would want to use a physical router are if you wanted to have multiple internet connections or if you had devices on your network that needed hardware-based acceleration (though they may also be able to take advantage of it in software). A virtual router can make an excellent replacement for a physical router when it comes to separating different parts of large networks because it is cheaper, smaller, and less power-hungry than the alternative. It’s very common in their industry today for companies to save money by using hosted servers instead of purchasing their own server hardware. Virtual routers are becoming more popular due to this very reason.

A virtual router has the advantage of running on existing hardware. It can use any spare resources (processor speed, memory, etc) to act as an extra router. This means that you don’t need to buy expensive routers or dedicate physical machines for solely routing purposes. A virtual machine is cheaper than most routers. Besides, by having multiple nodes you are able to create a more reliable spread out network with redundancy in case of failure. (so your traffic won’t be routed through just one source). You can also install custom software on it which adds greater functionality than what is normally available with most commercial routers. If things go wrong, virtualizing allows you to easily do a full reset without needing to open up the router again.

Virtual routers allow the user much more freedom than a physical machine because they can easily be customized to meet your needs. This can be as simple as changing the onboarding process to include steps such as username and password (if it normally doesn’t ask for those). You can also make changes to other settings such as QoS, firewall rules, and many other software-based settings.

5 – No worrying about extra hardware If your business is like most companies today then you have a limited amount of space and power to use. Virtualizing a router means that you can have a powerful router without needing an expensive physical device taking up extra network equipment room or rack space. For companies with large amounts of data that need fast speeds then virtual routing will allow them to have an extremely high-performance system. No worries of wasting money on extra hardware that they do not need or have space for.

One of the best benefits of virtual routers is that it’s very easy to set up. With some routers, you may have to spend hours setting things up and verifying everything is working properly, especially if you are unfamiliar with how networking works. Virtual routers make this easier. This is because you can create a machine with the settings already configured. put it into service, You can then leave it alone for a few days to verify that everything is working well. If not then you are able to go through and change things again. If all is well then you can delete the router instance without any negative effects on your network.

Virtual routers make it very easy to expand your network. Adding a new node takes only a few minutes and you don’t have to worry about any negative effects on the rest of your network. You can also use Virtual Routers as temporary backups for each other. If one of them goes down then you just need to spin up another, assign it to the same virtual network, and the new router will handle all of your traffic without missing a beat. This is especially useful for hosting providers who have large networks with several servers spread out across the world.

That’s a key advantage of a virtual router over a physical router. You can use a virtual router on any computer that meets the minimum requirements. The only thing you need is access to the appropriate interface on your computer. If you are on a LAN then it will act as another router in that local network. If you are on the internet then it will act as an internet connection for others on that network. Virtual routers offer much easier and more reliable networking than physical routers. Once virtual routers have the right configuration they work seamlessly. You don’t need to worry about them failing because you can create multiple hosts for a single virtual router if one fails. This means that your business will not lose any functionality due to the failure of a router node. This is especially important in an emergency situation where downtime needs to be minimal.

Managing your network with Virtual Routers is easier than it would be with physical routers. All of the nodes connected to your virtual network appear as individual devices in whatever software or control panel you use to manage your system. This allows you much better and granular control over each node and how it functions within your network. The same is also true when interacting with other networks, external parties will see your virtual routers as individual networks rather than a large single router. Therefore, you have more control over how they can interact with each other and what resources they have access to.

The only major disadvantage of virtual routers is the security risk, but you can overcome it by giving each individual VM its own firewall.

There are many different networking VMs available depending on what you need. OpenVPN has a version for cutting edge desktop VPNs, while Linux has Tinc for mesh networks or Quagga if you just want to get routing quickly without too much fuss. The possibilities are only limited by your hardware resources, imagination and expertise in setting up VMs.

Sp, that’s all. We hope now you know What key advantage does a virtual router has over a physical router. Virtual Routers offer some great benefits. You get easy network expansion and management, lower costs, and no extra hardware required. This makes them extremely useful for all types of companies who want more power or better performance at a reduced cost while still maintaining the same level of control over their systems. As 5G is around the corner, having a virtual router will surely benefit your network.