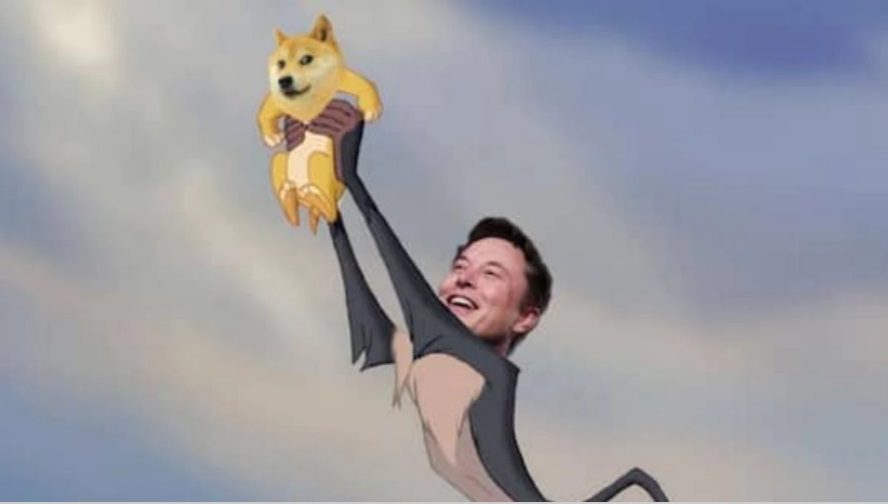 Do you know what these words have in common? If your answer is “really smart people,” you are correct, but also very wrong.

One of the most popular cryptocurrencies on the market, Dogecoin, has recently been in the news after Elon Musk tweeted about it. He called it “the people’s crypto” and revealed that he only owns Bitcoin, Ether, and Doge. However, all this tweeting about has also caused a lot of confusion among cryptocurrency novices.

So how is this cryptocurrency related to the CEO of Tesla and SpaceX? And why is he often found tweeting about it?

The short answer is that Elon Musk has nothing to do with this cryptocurrency.

The slightly longer answer is that Elon Musk has nothing to do with the cryptocurrency. Still, people like to joke about it because, according to Elon Musk’s Twitter bio, he has “literally no idea” what cryptocurrency is.

People also joke about it because it is… well, Doge.

Dogecoin: A Meme- based Cryptocurrency

For those of you who are new to the cryptocurrency world (welcome!), there is a popular meme called Doge that has persisted since 2013. It typically involves a Shiba Inu dog with poor grammar that often looks very serious, and the word “doge” is usually put inside of speech bubbles. A popular example of this meme is shown below: This image alone will probably be enough to explain why Dogecoin is so popular. As you can see, it’s fun! If it wasn’t obvious before, yes! Doge is based on a Meme. It’s also the most used cryptocurrency in terms of transactions (yes, you can actually use it in real life).

What Can you buy with DogeCoin?

You can’t buy much with Dogecoin, but you can use it to pay for things. Several online marketplaces support Dogecoin. I am not going to list any here because that would defeat the purpose, but a simple Google search will help you find them. 😉 Of course, if we were to analyze Dogecoin further, we would find that there is actually very little to analyze about it.

Dogecoin is almost exactly like Bitcoin in that you mine them, they lack centralization (meaning no one person owns all of the dogecoins). You can transfer them peer-to-peer between people without any sort of middleman.

Additionally, both cryptocurrencies are extremely volatile relative to other types of currencies. Still, their value has actually remained relatively stable compared to back in December when Bitcoin was at an all-time high.

But let’s get real: Dogecoin is just for fun! It’s super easy to mine (for example, if you have 500 computers mining bitcoin, you’ll only earn $2 a day—not worth it), so if you really want some free money, you should mine some doge!

Now that we’re on the topic of mining, it’s important to note again that Elon Musk has nothing to do with this cryptocurrency (he did tweet about it, but he didn’t make it or even endorse it). He is simply associated with the meme, and people like to joke about him having no idea what cryptocurrency is.

Can Dogecoin take over Bitcoin?

Also, while Dogecoin is an extremely popular altcoin—specifically because of its ease of mining—people often speculate that it will take over Bitcoin as the most used form of cryptocurrency in the world one day. We can safely say that this will not happen anytime soon.

Similarities between Dogecoin and Bitcoin

-They both lack centralization, meaning there is no governing body that can regulate them.

-They both rely on peer-to-peer transactions. People can trade them with each other without any sort of middle man.

-You can mine them, but it is very difficult to mine dogecoins compared to bitcoins. This is largely due because people have already started mining bitcoins, and so their difficulty level has risen considerably.

For example, here are just a few reasons why Dogecoin will never compare to Bitcoin:

-Dogecoin has almost no developer activity, while Bitcoin has a lot.

-Dogecoin is less secure because it’s based on Litecoin instead of the more technologically advanced Bitcoin source code.

-There are only 100 billion doge coins in existence, where there are 21 million bitcoins.

-People are much more likely to make larger investments in bitcoin because its value is constantly rising.

-People are also much less likely to take Dogecoin seriously, which means it will be much harder for it to rise in value over time.

Making Sense of the Mayhem

Of course, cryptocurrencies are unpredictable in nature, so you never know what will happen next. But for now, it’s safe to say that the memes will continue, and Elon Musk’s Twitter bio will forever be accurate!

Oh, and if you are wondering what Elon Musk, cryptocurrency, Dogecoin all have in common…aside from the fact that they all start with the letters that come one after the other in alphabetical order…they all have absolutely nothing in common.

But you already knew that, didn’t you? 😉

Side note: We will be publishing more crypto articles s oon. So, keep reading Techsips!

Editor's Pick
Previous ArticleDo you want a pink iphone 13? No Pro for you then!
Next Article How to Reset Home Screen on iPhone?